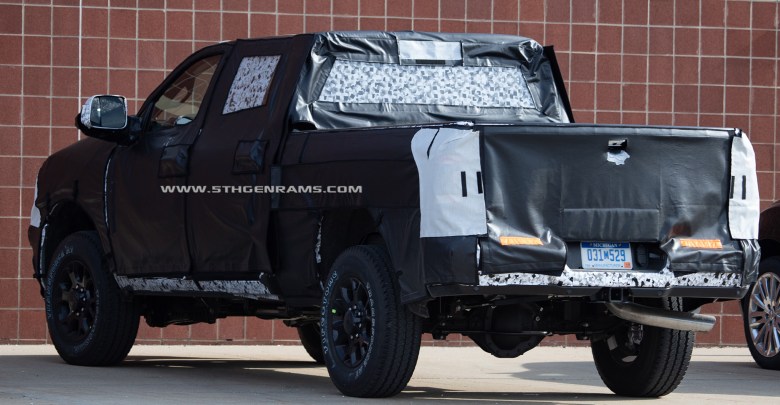 According to one of our inside sources, the 2020 Ram Cummins engine will remain at 6.7 liters of displacement. This is likely to be an all new engine which according to our source will feature a Compacted Graphite Iron (CGI) engine block. 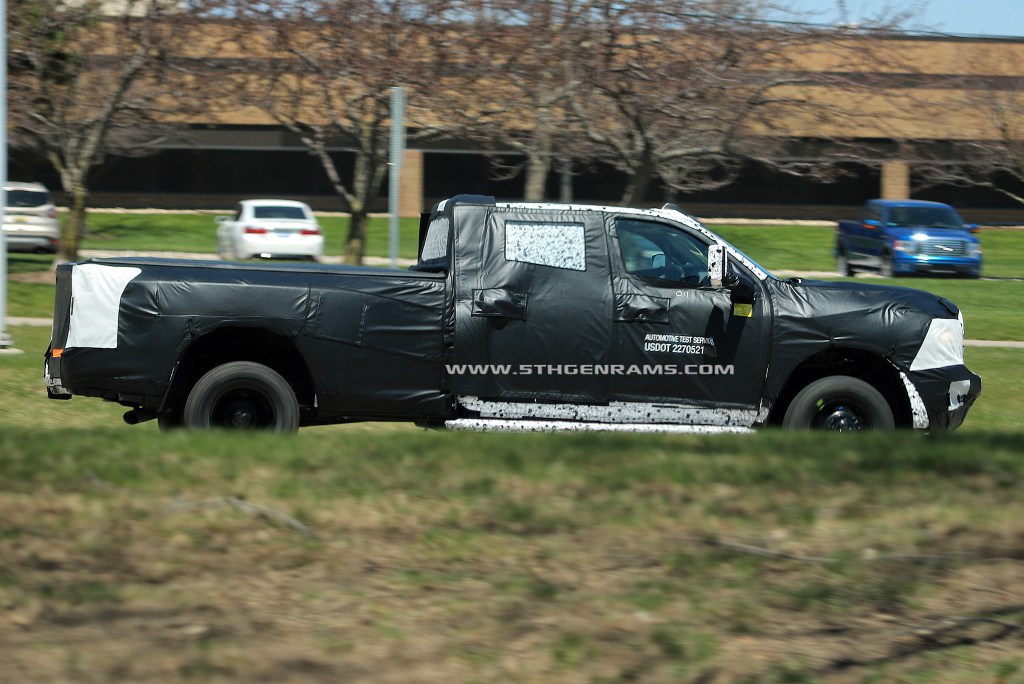 We are hearing rumors that the 5.7 Hemi will no longer be available in the HD trucks making the 6.4 Hemi the base and possibly only gas engine. While we broke the news about the upcoming 7.0l 426ci Banshee Hemi V8 coming for the Ram Rebel TR we have not heard anything about whether it will or won’t be available in the HDs. If it is, we would expect it to get its own unique “truck tune” possibly offering a lower HP number than in the upcoming Rebel TR but more torque and a lower peak torque. It is unlikely that we will see the Supercharged 6.2 from the upcoming Rebel TRX in a HD truck.

5thGenRams has heard rumblings that the new HDs could feature and Aisin sourced 8 speed transmission. While we don’t know that for sure I believe it would be a safe bet, I also think we will see the 66RFE and 68RFE dropped for the 5th generation HD. We believe that the 6-speed manual will live on, but that is unconfirmed at this point. 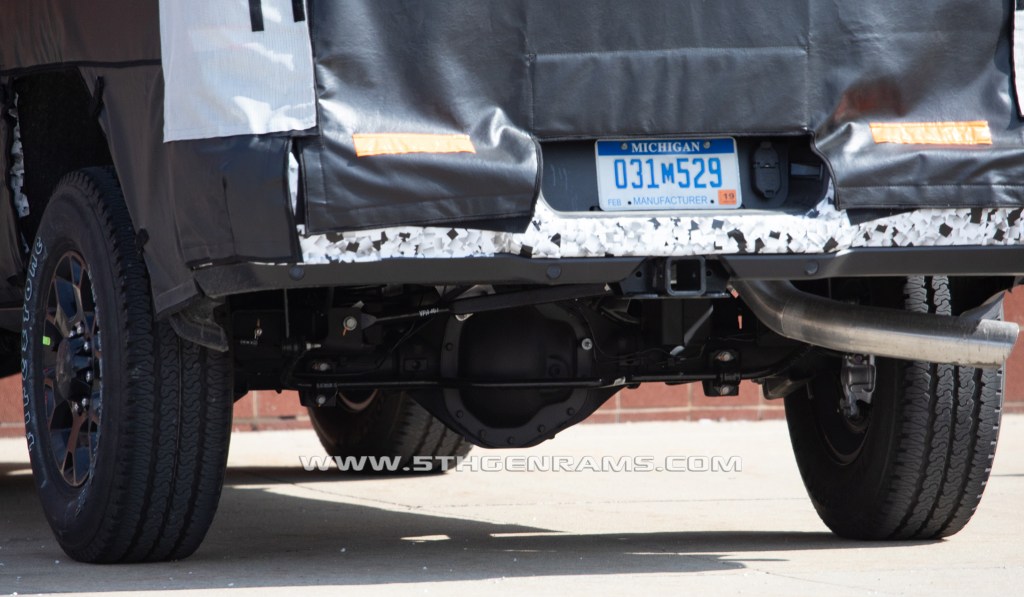 While we have seen in spy photos that the 2500 will continue to use the coil link rear suspension design, we expect the 3500 and above to retain the traditional leaf spring setup. As for the front suspension we don’t know for sure but are expecting the solid front axle to stay based on spy shots that we have seen. 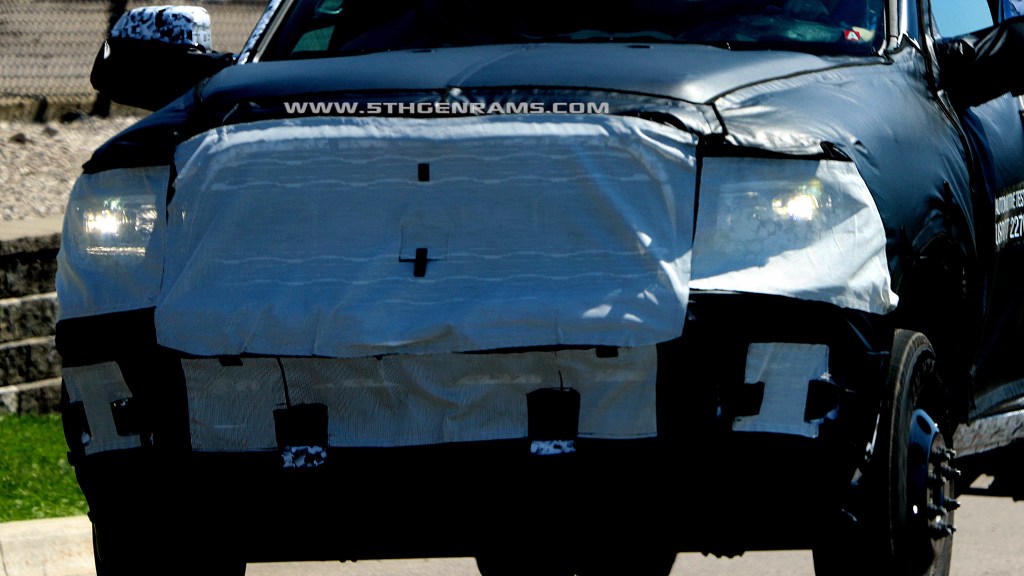 Expect the 5th Gen HD to share Cabs and boxes with the 5th Generation Ram 1500, but with unique front end styling more reminiscent of the current 4th generation HD trucks. Exterior wise this will be the most differentiated from the 1500 Ram HD ever. Interior wise, expect the same interior as the new 1500s including the 12 inch display, but with some minor tweaks so that Ram can fit auxiliary switches on the center stack. Mega cabs will be back with a “lounge seating” option with rear seat entertainment. Expect the Ram box to be available with the 6’4 box and trickle down to the 1500s which are currently only available with a 5'7 Ram Box. 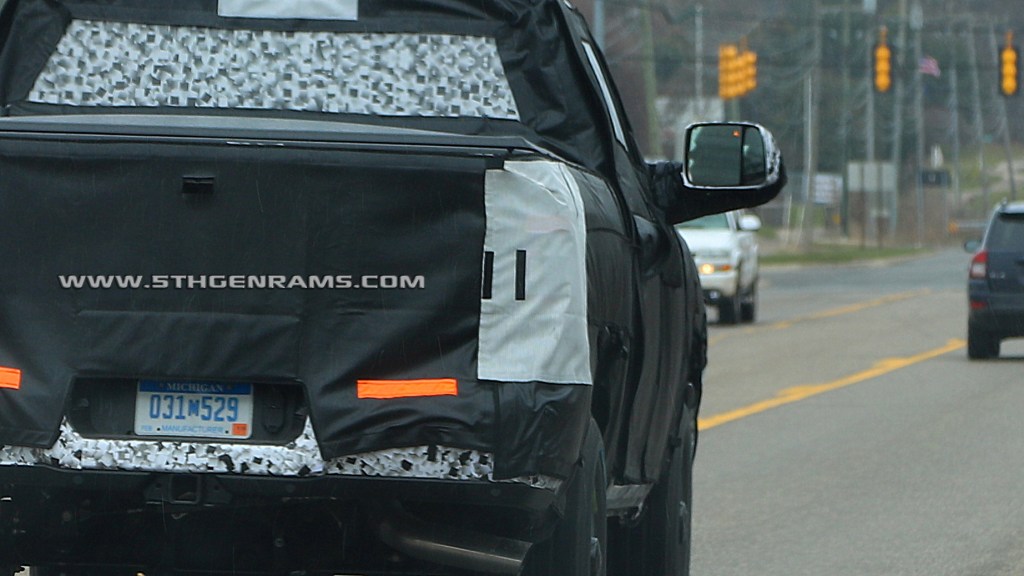 Expect all the infotainment, driver assist and safety features of the new Ram 1500 to be available on the 5th generation Ram HD, including adaptive cruise control, 360 degree surround view camera etc.

From what we know the 5th Generation Ram HD is shaping up to be a real winner, make sure to check 5thGenRams regularly as we will be releasing information as it becomes available.
Last edited: May 31, 2018

Awesome. Thanks for some HD news. As much as I love Cummins and hope they continue to dominate the heavy haulers with our Ram truck, I hope the gasoline side gets some love, as mentioned, with a big truck tuned gasser to dominate that segment too.

I hope the 6spd manual stays mated to that Cummins, and I wish they would mate it to the 7.0l if they go that route.

Guess I better get myself ready to start the anticipation and wait all the 1500 guys have had to endure.
C

The Swedish Company Sintercast is the wordleading provider with equipment making good CGI , Compated Graphite Iron. The CEO of this company is stating that midyear 2018 the production will start of a unknown inline diesel in high volumes. Nothing is said about the customer. Tupy of Brazil installed a Sintercast 3000 plus a year ago for "support the growing demand for Medium and Heavy Duty on-road CGI programs in North America" "Now, as those development efforts have led toward a new high volume series production order and intensified pre-production support, we are pleased to upgrade to the fully automated System 3000 Plus standard ". Read: Release
I find it very interesting to get this Cumminsrelated information as the Cummins 5 liter V8 diesel also is provides by Sintercast and Tupy. Cummins 5 liter V8 diesel. How does it sound with a offical debute at the State Fair of Texas at 28 Sept and sales soon after? Ford Super Duty 6.7 V8 already has Sintercast CGI in the block. With a CGI-block Cummins may pass the magic 1000 lb/ft and 450 hp levels.

Any word on if they may be moving to steel pistons to handle higher cylinder pressures?

haywaj said:
Any word on if they may be moving to steel pistons to handle higher cylinder pressures?
Click to expand...

I haven't heard anything about the internals as of yet.
I

Glad to see that they're doing something (hardware wise) to the 6.7 cummins!
C

haywaj said:
Any word on if they may be moving to steel pistons to handle higher cylinder pressures?
Click to expand...

Most likely. This is written about steel pistons in a diesel engine for aviation
Again, the Graflight V-8 takes advantage of stronger materials in its pistons, employing steel instead of aluminum, which is prone to melting failures. Strong, fatigue-resistant steel allows shorter pistons, reducing overall engine weight. And since steel pistons have almost the same thermal expansion coefficient as the CGI block, engine warm-up damage is minimized. Friction and wear are also reduced compared to aluminum pistons, and cold weather starts are not a problem. Taken together, the CGI block and the steel pistons allow for a target TBO of 3,000 hours, compared with 1,500-2,000 hours for other diesel piston engines.
Graflight
Mahle is already providing steel pistons to the "old" Cummins 6.7 for the racemarket.
Mahle
C

Curious why the mega cab would continue, since the new crew cab is lengthened and has the reclining seats already? I figured that was going to allow elimination of the mega. I remember early 5th gen spy shots assumed mega cab was coming to light duty, but it just turned out to be the new longer crew cab.

And any word on extended/quad cab? (maybe with 8' bed?)

Rustydodge said:
Curious why the mega cab would continue, since the new crew cab is lengthened and has the reclining seats already?
Click to expand...

Maybe they'll put a third-row seat in it

I passed a custom 3 row 3rd gen cummins on the interstate one day. Pretty sweet. I think it was a short box dually.

You must log in or register to reply here.